Share All sharing options for: Tiger Woods' statement and transgressions 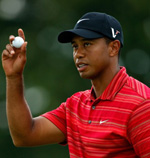 I talked to my sister today about Tiger Woods. If you have read Outsports for the full 10 years we've been around, you may remember that she's dabbled with pro athletes more than once. She told me all the talk about Woods is ridiculous. "Of course he cheats. Ninety-five percent of pro athletes cheat." It's a sad statistic, but it's probably true. Rich, often attractive (or at least fit) men flying around from city to city, away from their wives for long spans, start looking elsewhere.

I've never been one to say that because someone fits a statistic it makes it "OK." But I'm certainly not going to judge Woods for his "transgressions." If he cheated on his wife, he'll have to deal with her and his family. It doesn't change Tiger Woods the golfer in my eyes: I'll still be planning my spring and summer Sundays around whether he's in the hunt or not. He didn't call me a faggot. He didn't kill someone. He didn't get caught taking performance-enhancing drugs. So he gets a pass on this one from me. Though I'm sure his wife has other thoughts.

But for me, the virtue of privacy is one that must be protected in matters that are intimate and within one's own family. Personal sins should not require press releases and problems within a family shouldn't have to mean public confessions.

BTW, I wonder if the National Organization for Marriage is going to be protesting Woods at his next tournament...