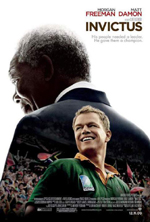 Clint Eastwood is one of my favorite directors because of how deeply he delves into the characters in his films. Million Dollar Baby, Unforgiven, Gran Torino...these are great character studies that each left me emotionally drained. In Invictus, Eastwood had the opportunity to share with us the lives of two great men; Instead, the surface-level approach he took with the characters left me rolling my eyes.

The film is the true story of Nelson Mandela's (Morgan Freeman) rise to power in South Africa and the alliance he allegedly formed with the captain of the nation's rugby team, Francois Pienaar (Matt Damon). In the over two hour-telling of the story, we literally learn nothing about Pienaar; His hopes, fears, loves, background, all of it is left a mystery. He's no more a character than the cup of tea he sips or the ball he tosses.

As for Mandela, we understand from the film's title that he's "unconquered" (as it translates from Latin), but it might have been a better title if it chronicled his time in jail. To show Mandela's continued struggles, Eastwood relies on some over-played (and all too long) scenes between his black and white security guards. Ugh.

The film ends in a "climactic" rugby game: The 1995 Rugby World Cup Finals. I avoided looking up the results before the film because I didn't want to know how the film ended (and I certainly won't ruin it here). But I realized halfway through the 20-minute scene (that is entirely consumed by the game) that I didn't care who won.

Sure, I saw some black and white fans cheering together. Yeah, I get the whole meaning of the unification of South Africa. But a film should make me care what happens in the end, regardless of the historical context of the story; And I just didn't care.

Part of the reason was the haphazard way the film led up to the finals. Games were thrown into the background of the story, despite being of utmost importance to its advancement. The results were rushed through and we were on to the next one. As I said, the final result was that I couldn't care less who won.