Why do women-chasing jocks get married?

Share All sharing options for: Why do women-chasing jocks get married? 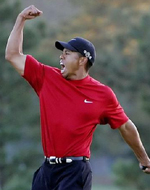 Now that as many as 10 women have claimed to have had sex with Tiger Woods, it makes me wonder even more why rich jocks who like having multiple sex partners get married in the first place, especially so young. Kobe Bryant was 23 when he married, Tiger Woods was 29.

Both have had reputations of being skirt chasers, and there are numerous other examples in sports. Nothing wrong with liking sex with many women, but why get hitched? Love? Image? Sponsors?

Or is it a feeling of being invulnerable, as if the fame and the millions somehow insulate them from the risks and downsides of cheating on their wife? In the wake of the accident, Tiger reportedly said he needed "a Kobe special," which he described as a "house on a finger." With reports that his wife has moved out and bought a house on an island in Sweden, Tiger might need to up the ante.

So tell me -- why do a lot of jocks tie the knot long before they're ready to settle down? Being a swinging single hasn't hurt Derek Jeter.