Share All sharing options for: BJK asks Nadal and Federer to support gays 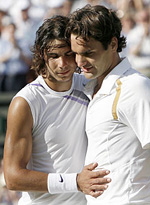 Out tennis legend Billie Jean King talked about her outing and today's gays in tennis with Tennis.com. In addition to saying she knows a couple closeted gay men in tennis, King places the responsibility for opening the door to openly gay tennis players squarely on the shoulders of the best male players in the world, which today means Roger Federer and Rafael Nadal:

We need straight people, particularly in the male arena, to support the gay guys. They have to. And if they stand up for us, that's how we gain acceptance. We need our friends, or brothers and sisters, especially if they have influence. Federer and Nadal and those guys have to say we don't care. Once the influence starts to talk like that, it makes a huge difference. It's got to be the top players. [They] influence where the tour goes. That's part of the responsibility of being in the Top 10, the Top 5 in the world. That goes hand in hand with making the big bucks, getting the most exposure, getting the most endorsements.

All of the rumor-mongering probably can't help the matter. Go to Google and type in "Rafael Nadal gay" or "Roger Federer gay" and see what pops up: Baseless assumptions and guesses about the sexuality of these men because they're single and attractive. I suppose the picture above doesn't help, either. What's the old question Details used to ask: "Gay or European?"