Share All sharing options for: Kiss Zach Randolph, get punched 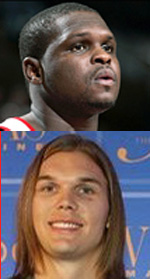 Zach Randolph of the Los Angeles Clippers (photo top) was suspended two games by the NBA after punching Louis Amundson of the Phoenix Suns during their game Tuesday. Randolph detailed Amundson's "crime":

"He hopped up and got in my face and almost kissed me in my mouth," Randolph said. "I just pushed him out of my face. If I would have hit him, he wouldn't have got up off the ground."

Amundson said that "I was getting in his face, but I wasn't trying to kiss him."

Some people who follow the NBA think Randolph got off easy with only a two-game suspension. Randoph's reaction to what he perceived as a kiss is not surprising given how weirded-out many jocks get with anything that smacks of male-to-male affection, even of the mocking kind.