Share All sharing options for: Swimming tackles the high-tech swimsuits 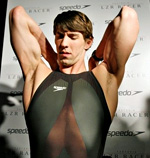 Here is a sports headline that warmed my heart: "Swim officials want more skin, less suit in the pool." FINA, the governing body of international swimming, is discussing new rules to restrict the use of high-tech swimsuits of the kind that led to a ridiculous 108 world records in the past year. Some critics have called the use of such suits "high-tech doping."

"Potential regulations regarding suits include a maximum buoyancy effect, a maximum thickness (no more than one millimeter), limiting coverage areas (suits would not extend past the shoulders or ankles and would end below the neck), and limiting swimmers to wearing one suit at a time.

Yes, that last item is correct. Apparently, swimmers were putting on two, and sometimes three suits to receive enhanced benefits. Also, there have been rumors of suits' providing external influences: pain reduction and electro-stimulation.

The trend was accelerated by the introduction of Speedo's LZR suit, which saw a flurry of world records fall in the first month of its use early last year. This prompted an arms race among other manufacturers and put more focus on the technology than the athlete.

Returning Olympic medallist Geoff Huegill welcomed the recommendations, saying they would restore a level playing field to the sport.

"All of these suits should be tested and I think the other changes make a lot of sense," he said. "It was pretty embarrassing when you had people like (Italian Olympic champion Federica) Pellegrini wearing multiple suits - she looked like the Michelin man. I am all for evolution in the sport, but a line had to be drawn somewhere."

I have jokingly lamented the aesthetic abomination of the new full-length high-tech suits, but on a serious note agree that standards need to be set. If all swimmers wore the same suit, then each would sink or swim based on his skill and training.

Below, the ideal swimsuit: 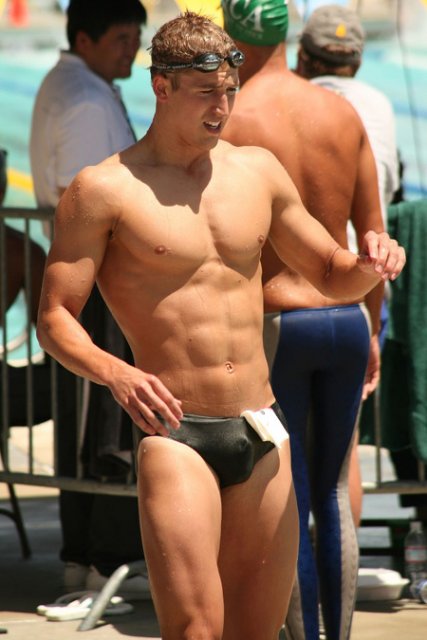