After almost of a month of voting and almost 30,000 votes cast, we have arrived at the Final Four for our Local Groups Challenge. The finalists for the title of Outsports' Best Gay Sports Group of the Year are:

While the first four rounds of the contest have been via popular vote, we have chosen a panel of judges to help choose the final winner. Each judge will review the organizations and what they accomplished in 2008, and they will vote on the winner. The panel includes Patricia Nell Warren, author of The Front Runner, many other books, and Outsports' series on the history of gay athletes; Ted Rybka, sports media director at GLAAD; LZ Granderson, ESPN personality and columnist; and Matt Hennie, journalist and Outsports blogger.
The overall winner will be announced the afternoon of Friday, April 10.
A note to the participants about the vote tallies. We were made aware of ways to get around the voting software in the second round as the supporters of at least one group circumvented the one-person/one-vote rule. We were very cognizant of this going forward and used every tool we had at our disposal to determine if voting outcomes were affected by a few people voting dozens of times. We removed hundreds of votes from some matchups and are confident that the outcomes of each round reflect the will of our readers and your supporters. 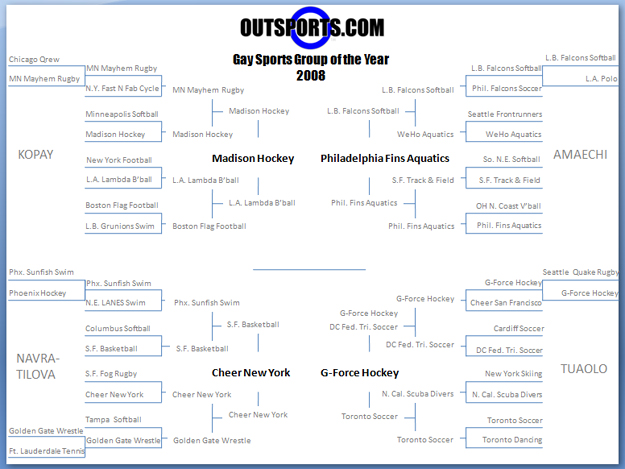