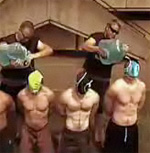 Members of the University of British Columbia football team allowed themselves to be fake waterboarded as part of a provocative short film that deals with human rights and what the filmmaker sees as the conformist nature of Gay Pride events. (Film clip below).

Xtra in Canada details the film by Noam Gonick, who contends that Pride is becoming a "military parade that glorifies fascist imagery of cops, conformity and corporatization." Gonick originally produced his film to address human rights issues. His subjects in the film were the football players from the UBC Thunderbirds.

Gonick asked the Thunderbirds to imitate waterboarding techniques on each other, with players' faces covered in rainbow-colored underwear. They also performed hazing rituals.

"I didn't even have to direct them," the filmmaker says. "It took off on its own."

Gonick and animator Dennis Tam edited the football player footage with graphic text ‘scorecards' recalling military dictators like Adolf Hitler and Augusto Pinochet. He also gave his film a name: No Safe Words. In SM culture, a safe word is what a slave says to a master to force them to stop. "In human rights abuses," says Gonick, "there are no safe words."

When Gonick showed the short film at the 2008 Toronto Pride he was struck by how police and soldiers were part of the revelry, which bothered him given past negative associations with police and gays. "We're willing to do anything to get the approval of the state." He incorporated images from Toronto into a longer film to be shown this summer.

Gonick clearly is meant to be provocative, so what kind of response does his film provoke in you? I found the clip below muddled and not very effective in its message. Had I not read the article and Gonick's reasons for making the film, his message would have sailed 10 feet over my head.