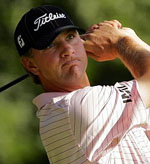 Congratulations to Lucas Glover, who notched his second tour victory today that happened to come at the U.S. Open on one of the toughest courses around: Bethpage Black. His 4-under final score was enough to hold off Phil Mickelson (who has now finished second in the tournament more than anyone else) and David Duval, both of whom shared the lead late in the final round, and Ricky Barnes, who faded in the final round.

But to me, this U.S. Open will long have a big question mark over it because of the rain in the first two days and how the tournament organizers handled it. Of the top five finishers, none had to golf in the rain on Thursday, and the earliest Friday first-round tee time for any of them was 10:33 a.m. In fact, the only person to not finish over par and tee off on Thursday was Tiger Woods. On the flip side, while three more players got to start on Friday instead of Thursday, 58% of the players cut after the second round had to start in the rain on Thursday. Twenty of the 26 worst scores in the first two rounds were from players who had to play the poor conditions on Thursday and early Friday. The average first-round score of those who started Thursday was a full two strokes higher than those who didn't.

One of my friends who played golf in college said "that's golf." No, it doesn't have to be. Weather doesn't have to play such a big role and be such a big disadvantage for players who got unlucky with their tee time. Can you imagine if they told Roger Federer that he had to play in the mud while his opponent got to play on a dry surface?

Unfortunately, the golf powers-that-be feel the need to get the tournament completed by Sunday, so they force players out in terrible conditions knowing not everyone will have to go. And what happens in the end? They go to Monday anyway. Change the rules! Be smart about when you send people out. And if some players have to play in the rain before the horn blows, figure out a tee-time system that will send the rest of the players out first the next morning so they have to play in the mud of the early morning. There are creative solutions golf can implement that will make the playing field more fair. But, the sport that prides itself on tradition above all else will keep up the unfair practice.