Being down the street from Nike world headquarters has its perks ... and apparently its drawbacks. The ever-molting Oregon Ducks have again changed their football uniforms. This season they will have five different jerseys that they will wear: Black, green, yellow and two white. They've also thrown in some silver, for good measure. As opposed to past incarnations, these are incredibly bland except for some (dare I say "gay") feathers on the shoulders. The feathers actually look like the insignia of a bird of prey; Note to Oregon, a duck waddles and eats grass. The numbers look like they're printed with some font created for the movie Independence Day.

What do you think of the new unis? Larger pic after the jump. 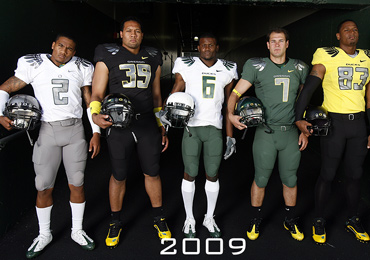