A former Yankee is gay

Share All sharing options for: A former Yankee is gay 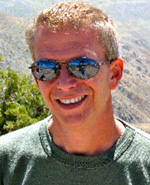 In his interview with AfterElton, TV star Wesley Eure (Land of the Lost) came out of the closet this week. He also said he has a partner, Richard, and that Richard played for the New York Yankees. AfterElton even used a picture of Richard (right). We've been in touch with Richard, who seems like a very thoughtful man. As he wrote us:

First, let me set the story straight (so to speak). I played in the minors for three years before the "typical" knee injury ended my career. I did get called up to the Yankees ... for one day! I suited up, warmed up, and promptly sat on my butt for the game. It was exciting, I have to admit, being in Yankee Stadium in pinstripes!

For now, he doesn't want to reveal his identity or talk about his time in baseball; But he said that could change at some point down the road. We anxiously await that day and will respect Richard's privacy until then. Best of luck to him and Wesley!