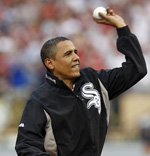 Leave it to Fox Sports to screw up what should be the easiest shot in baseball: The ceremonial first pitch. But that's just what the bozos did at tonight's All-Star Game in St. Louis, when we saw President Obama, clad in a Chicago White Sox jacket, throw the first pitch.

Except, we never saw the whole pitch, just Obama's windup and delivery. We never saw who caught it (Albert Pujols was IDed about two minutes later) and we never saw it actually go over the plate. A graduate student director could have gotten that shot (hint: use the camera behind home plate, or a camera behind Obama). And there was no replay as they went into commercial. So we have no idea whether Obama did a good job or would make the blooper reel.

Just checked Deadspin's live blog and loved this: "WHAT KIND OF CAMERA ANGLE WAS THAT ON THE FIRST PITCH, YOU DUMB [F***S]?!" And I had to read a blog on the New York Post to find out what happened:

He threw lefty and didn't have much heat on the looping toss, but Albert Pujols stepped up and made the catch before the ball hit the dirt and President Obama gave a fist pump. He gave it his best shot.

This is not some evidence of a vast Fox right wing conspiracy, just the network's usual incompetence when it comes to televising sports.

I do not have a HD set. Did those of you with HD see the whole pitch? If so, it still shows incompetence since most people still don't have HD.

Update: Found this on YouTube (not sure how long it will stay up) and you see a bit more on a wide screen, but still a lame effort by Fox: