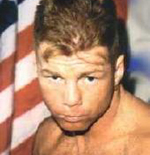 Gay Olympic silver medalist Mark Leduc has died at the age of 47. He won his Olympic medal for Canada in boxing in 1992. He was apparently found dead in a sauna, and the assumption is that he died of heat stroke: A strange way to go for someone who made his career knowing the ins and outs of a gym. But little about Leduc was conventional. He found his way to boxing while serving time in a penitentiary for armed robbery. He spent time later in life speaking on gay issues and to gay youth in particular.