Share All sharing options for: Serena Williams has meltdown at U.S. Open 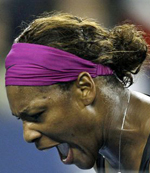 It is never a good night for a tennis player when she is heard telling a line judge: "I swear to God, I'm fuckin' takin' this ball and shovin' it in your fuckin' throat ... I swear to God." Then has to deny that she threatened to kill the line judge. It was so bad that even John McEnroe said it was inexcusable.

But that's what happened to Serena Williams in a bizarre end at the U.S. Open women's semis, when Williams was called for a foot fault down 15-30 to Kim Clijsters and down to match game. The fault made it 15-40 in Clijsters' favor, then she was awarded match point when tournament referee Brian Earley penalized Williams for abusive language towards the line judge. (Williams had gotten a warning earlier for smashing her racket).

By some accounts, the foot fault was a tough call to make in those circumstances. But bizarrely, this is what Williams said about the foot fault in her post-march interview:

Then why did Williams from act like a raging ass, yelling at the hapless line judge, turning back to play, then changing her mind and berating the judge again using multiple f-bombs, according to reporters at courtside? Chris Chase of Yahoo has a theory:

The explosive end is sure to obscure the fact that Serena probably would have lost the match without the foot fault. Clijsters was playing great and Serena couldn't win a point on her second serve. The end was coming, Serena's outburst merely hastened its arrival. Maybe that was the point.

I am not a tennis buff, so would love to hear what you fans think of the call and of Williams' meltdown.