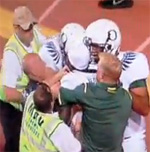 How boring was Boise State's 19-8 sloppy win over Oregon in the college football opener? The lasting impression will be Oregon running back LeGarrette Blount punching Boise State's Byron Hout after the game. It was a shocking display of a player who seemed to have gone nuts and will lead to at least his suspension if not dismissal. (Watch the video below).

Before the game, Blount bragged about the Ducks were going to give Boise State an "ass whipping." He then rushed for -5 yards on eight carries and was tackled for a safety. After the game, with the players from both teams milling about, Hout tapped Blount on the shoulder and said something. As Bronco head coach Chris Peterson started yelling at Hout (for bad sportsmanship, I assume), Blount turned back and threw a hard right that nailed Hout flush on jaw, sending him to the Broncos' blue turf. Hout did not have his helmet on.

We then saw Blount throw a punch at a teammate trying to calm him down, wrestle with an Oregon assistant, security and police officers and try to get at some fans who were taunting him. All in all, an ugly display by a player who was kicked out of an Oregon practice this summer for being disruptive. He apologized after but the damage was already done. Blount may have punched an opponent, but it was Oregon football that wound up with a black eye.

Update: The day after, Oregon suspended Blount for the season, but will remain on scholarship. Hout will not be suspended for taunting Blount, but his coach said he would give him a good talking to.