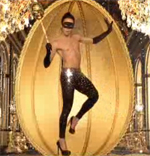 Sundance Channel's new series Be Good Johnny Weir premieres tonight with the airing of the documentary, Pop Star on Ice. It airs every Monday at 10:30pm, and the show's new episodes start in earnest next week with a trip to Europe. Oh, and if there's still anyone in America who doubts that Johnny is openly gay, just take a look at the promo, after the jump.

The show could get more attention because Weir made the U.S. National team, announced this morning. We'll have more on that shortly.