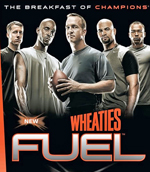 I am starting to see a big push for Wheaties Fuel, a new version of Wheaties geared to men. Ads featuring Peyton Manning and other sports stars are starting to air. As someone who is big on nutrition and an obsessive label-reader, one thing is obvious: Wheaties Fuel is basically Wheaties with more fat and sugar.

Regular Wheaties is a pretty simple cereal with only five ingredients: Whole grain wheat, sugar, salt, corn syrup and trisodium phosphate. One serving (3/4 cup) has 100 calories, .5 grams of fat, 4 grams of sugar, 15 grams of other carbs, 3 grams of fiber and 3 grams of protein, along with some added vitamins. Wheaties Fuel, in contrast, loads up on the sugar, with some added fat.

Fourteen grams of sugar per serving is a lot for anyone who cares about their nutrition. Basically, General Mills added a lot of sugar and more fat while trying to pitch the cereal as some sort of breakthrough -- "Engineered to deliver long-lasting energy to help fuel your needs." Americans already consume too much sugar in their diets, so why buy a cereal that just adds more? If regular Wheaties are too bland, just add some sliced fruit or some nuts.

By Champions. For Champions. The new Wheaties FUEL was co-created with a team of today's elite champions including Peyton Manning, Albert Pujols, Kevin Garnett, Bryan Clay, and Hunter Kemper. Working with Dr. John Ivy, a performance nutrition expert, the Co-Creation Team designed Wheaties FUEL for the active individual; whether that activity is due to participation in athletics, work related activities or leisure time physical pursuits.

Wheaties Fuel is more about marketing than nutrition. The New York Times reported that sales of Wheaties have lagged and that Fuel is marketed exclusively to men, who I guess want a lot more sugar with their cereal. Eating a bowl of Wheaties Fuel occasionally is no big diet no-no, but don't buy the stuff thinking you're getting some nutritional advancement.