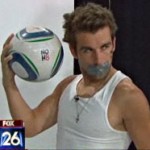 Mike Chabala of the the MLS's Houston Dynamo is the latest athlete to be photographed as part of the NoH8 campaign, a response to the passage of Prop. 8 in California in 2008. Subjects are photographed with duct tape over their mouths to symbolize being silenced by Prop. 8.

"It was quite an honor when I got the offer to do this," Chabala said. "It's not a Republican issue or a Democratic issue, it's a human rights issue."

Chabala, 26, noted that it was important for him to speak on the issue in conservative Texas. The Fox Houston reporter who did the story mentioned that Chabala was not gay. Other athletes that have also helped NoH8 include wrestler Hudson Taylor and Olympic speedskater Blake Skjellerup.