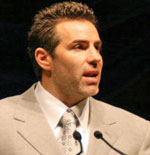 Former NFL quarterback Kurt Warner has always been very public about his religion, citing God in virtually every interview. It's also a popular topic on his Twitter feed. His overt religiosity was always annoying to me, but we never had a clear view of how he stood on gay issues. We got a bit of a glimpse with a Twitter dustup he had with some followers last week.

Adam Amel Rogers of the Change.org website followed the response when Warner tweeted about how he was hanging out with Eric Stonestreet, who plays half of the gay couple on the ABC show "Modern Family." Some of the response were anti-gay, Rogers writes:

Kurt didn’t ignore the comments, instead he countered the anti-gay tweets by saying:

@kurt13warner Lots of comments about gay couple on ModernFamily, what do u say WE just Love ppl & let God do the judging! Who's with me? ...

Twitter user Michelle Levy called Kurt out on the loaded tweet, saying "my 2 cents... love all and let g-d judge when referencing gays is super condescending and a way to say you think it is wrong." This prompted Kurt to reply and reiterate his original statement, "My point isn't 2 prove right or wrong, thats God's job, my point is 2 love all ppl the same & lead them 2 Jesus!"

What if I don't want to be led to Jesus, Kurt? Am I doomed to roast in the fires of hell (or Phoenix, which is even hotter)? I would like to know how readers feel about what Warner said -- was it positive or condescending?