NFL Week 7: "He grabbed my crotch"

Share All sharing options for: NFL Week 7: "He grabbed my crotch" 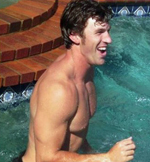 Hot NFL player of the week

It was a wild Week 7 in the NFL. The biggest upset came in New Orleans, where the Browns clobbered the Saints. Afterward, Browns' players said the Saints played dirty, with one saying a Saint player "grabbed my crotch."

Elsewhere, our hot player of the week is a stud Bengals rookie. In San Diego, the Chargers gift-wrapped the game for the Patriots. In Chicago, Jay Cutler's favorite receiver was a defensive back, and Brett Favre lost in his second return to Lambeau. Check out our Week 7 notes.