A gay athlete's "It Gets Better" video

Share All sharing options for: A gay athlete's "It Gets Better" video 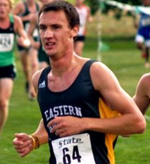 We wrote yesterday about Eastern Michigan starting a group for gay athletes and their allies. One of the board members is Austin Hendrix, 21, a runner on the school's cross-country team.

Hendrix also has done a video for "It Gets Better," the online project started in reaction to suicides by gay teens who have been bullied.

Hendrix was not bullied but his story still resonates since it's a familiar one for young gay men. He struggled before coming out to his teammates, but says they have been great and he has been accepted.

"It's gotten so much better. ... If you accept yourself, there are people out there who will accept you as well."

Hendrix said he thought his video was a bit dull since it was awkward to speak solo to a camera (his cat does make a cameo). But it's precisely out and adjusted athletes like him who can be powerful symbols to others struggling with their sexuality. That's a message that's anything but dull.

If anyone knows of any other out athletes who have also done videos, please send us the link.