Share All sharing options for: NFL Week 4: Fizzle and sizzle

The absurdly hyped Vick-McNabb death match is a bust. The real action came elsewhere, with the Jags stunning the Colts. Bonehead coaching and plays took center stage in what is officially a bizarre year. The hot player of the week is rookie returner.

Much ado about nothing: I was sick of turning on ESPN or the NFL Network all week and being inundated with Vick vs. McNabb and Donovan’s return to Philadelphia. Blah, blah, blah. I had not known that the NFL had eliminated 30 other teams and only Washington and Philadelphia were still playing.

So it was rich irony that the whole setup turned out to be a bust. Vick got hurt with possible broken ribs and the storyline fell apart. Washington won a lackluster game, 17-12, which ensured there will be no quarterback controversy in Philly given how average Kevin Kolb played in relief; Vick will get his job back when he is healthy.

McNabb was not very good – 8 of 19 for only 125 yards – but he got the last laugh with his team getting the win. Hopefully the return game won’t get nearly the hype as this one did. The media love to beat a story senseless, then beat it some more.

Thrillers: The Game of the New Millennium in Philly was a snoozer but elsewhere we saw six games that were pretty exciting. The best was in Jacksonville, where the Jags upset my Colts, 31-28, on Josh Scobee’s 59-yard field goal at the gun. The Colts have been victimized by two of the four longest field goals ever to end a game (Scobee on Sunday and Rob Bironas of Tennessee, who kicked a 61-yarder in 2006).

Peyton Manning was his usual brilliant self, throwing for 352 yards and leading the Colts on 96- and 65-yard drives to forge ties in the fourth quarter. Unfortunately, Manning doesn’t play defense or decide when to call timeouts, and both those doomed Indy (2-2) this week (a lost fumble and a fluke interception in the red zone didn’t help).

The Colts defense was awful, making the Jags (2-2) look like a playoff team. This is the same Jaguars who lost their last two games each by 25 points. On top of it, Colts Coach Jim Caldwell called a stupid timeout with 38 seconds left as it appeared the Jags were content to run out the clock and play for OT. The T.O. came after an 8-yard run gave the Jags a 2nd-and-2 at their own 31 and with only one timeout of their own. Caldwell’s decision allowed Jacksonville to change its strategy (by stopping the clock on a running play). They then threw on the next four plays, and got close enough for Scobee to nail his kick. A stubborn Caldwell insisted after the game that he would make the same call over again. If so, he’s an idiot.

The Jags got a huge break when Colts DB Kelvin Hayden dropped an interception that hit him in the hands on the play prior to the field goal. This is the kind of games the Colts won last year when they started 14-0. This year, the breaks aren’t going their way and the result is their first 0-2 division start since 1998. Indy is no playoff shoo-in with that defense, and each week will be a grind. Years on living on the edge and surviving may be catching up to Indy.

Bonehead: Nate Clements of the 49ers had intercepted a Matt Ryan pass and it looked like San Francisco was going to get its first win and upset the Falcons. But Clements decided to not slide or step out of bounds and allow his offense to run out the final 1:31. He tried instead to score, was stripped by Roddy White at the Falcons’ 7 and lost the ball. Ryan then led an improbable drive that resulted in a Matt Bryant last-play field goal and a 17-16 Falcons win. I know the instinct for Clements was a touchdown but he would have been much smarter to slide down and give the 49ers their first win. 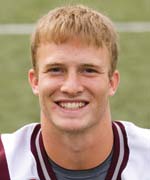 Hot player of the week: Marc Mariani was a seventh-round pick by the Tennessee Titans, but the rookie from Montana improbably made the team. He had a memorable day for both good and bad in the Titans’ 26-20 loss to Denver. The good: He returned a kickoff for a touchdown. The bad: He fumbled a kickoff that killed any chance of the Titans getting the ball back for one final drive at game’s end. No matter, Mariani, 23, 6-1 and 190 pounds is hot. But he’s so obscure that the only good shots I can find are shots of him from his collegiate days at Montana.

If you have a hot player of the week candidate, send the name to jim@outsports. Thanks.

Weird year: You know the season is officially bizarre when the only unbeaten team after a month is the 3-0 Chiefs. And the only reason KC didn’t lose Sunday was that they had a bye. With consecutive road games looming at the Colts and Texans (3-1), we’ll see whether the Chiefs are for real. I doubt it.

Elsewhere, 2-2 leads the NFC East (Eagles, Giants, Redskins), with the 1-2 Cowboys very much in the division race after being written off by many in Big D following an 0-2 start.

In the putrid NFC West, the Rams, Seahawks and Cardinals all suck. But all are tied for first place at 2-2, with the 0-4 49ers still alive because they are lucky to play in what is by far the league’s worst division. I hope the Rams win it since I have been very impressed with the play of rookie QB Sam Bradford and their players were hotties of the week in weeks 1 and 2.

In the NFC South, the Falcons and Saints are 3-1 and one will win the division (Tampa Bay is a fraudulent 2-1). In the north, the Bears (3-1) fell to Earth with their dreadful offensive line play in losing to the Giants (allowing 10 sacks, with Jay Cutler going down nine times before leaving the game with a concussion). The Packers are also 3-1 but did not look good in holding off the Lions, 28-26.

The defending champion Saints are lucky to be 3-1. The record of the three teams they beat (Vikings, 49ers and Panthers) is a combined 1-10 and they had to survive the Panthers at home Sunday despite facing a rookie quarterback in Jimmy Clausen. Last year after four games, the Saints had scored 144 points; this year they have 79. Fortunately, their next three games are against the Cardinals, Bucs and Browns, so expect them to be 6-1 heading into a big Sunday nighter against the Steelers on Halloween.

In the AFC, the Jets and Ravens (both 3-1) look like the best teams right now, with the Steelers (3-1) thrilled that Ben Roethlisberger is finally coming back to rescue a sputtering offense. The Ravens’ 17-14 late TD win at Pittsburgh was the single biggest game in the league to date. A loss would have put the Steelers two games up in the AFC North, but now they are tied with the Ravens and have lost a home division game. The Jets have looked lights out in winning three straight division games after a Week 1 flop where the offense mustered a franchise-tying low six first downs.

Pop this: Expect Titans defensive coordinator Chuck Cecil to get a large fine after showing his middle finger in anger over a ref’s call. You can see Chuck and his little birdie here.

My bye: I will be off at Gay Bowl X in Phoenix, so no notes next week.