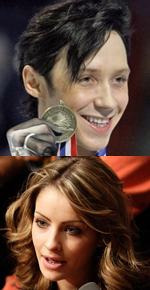 Someone at the U.S. Olympic Committee has a sense of humor: U.S. figure skater Johnny Weir has a roommate in Vancouver, and it's a woman. And not just any woman, but Tanith Belbin, the ex-girlfriend of Weir's U.S. teammate Evan Lysacek. Weir and Belbin each wanted single rooms, but none were available. At least we know there will be no hanky-panky going on. Of course, Weir is doing the decorating.

"I didn't think it was allowable to stay with a girl," Weir said. "Tanith and I just seemed we would be a perfect match. We're old friends.

Belbin is happy with the arrangement:

"I was only in my room about five minutes, but it smells amazing," Belbin said yesterday of the male skater's advance decorating. "Johnny said it did not [smell good before]. He said it smelled like wet dogs.

"It's beautiful. There are aromatic candles, and he had Audrey Hepburn posters and motivational quotes on the wall. And in the bedroom, he put away all my clothes. ... He told me he didn't have time to find Cher [posters]. But he hoped to be able to get out and shop for those later."

There was one single and a two-bedroom available that had to be divvied among Belbin, Lysacek and Weir. "And if you take Johnny and myself and Evan and do the math, the only logical answer was me and Johnny," Belbin said.

Update: When I first wrote this, I did not know that Lysacek and Belbin were exes (I apologize for the error), so I edited that part out. I still think it's funny that Weir is rooming with a woman instead of a male teammate.