Share All sharing options for: WTF? Canada wins gold, and other tales 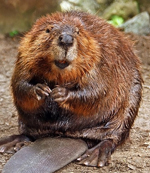 Jimmy D is filling us in on the Canadian Olympic obsession. In this installment, thoughts on a gold medal and the adorable winner; Bob Costas in HD; luge tragedy and beavers.

Through the magic of instant editing, my initial contribution to this site included the news of Canada's first ever gold medal won on home soil. I realize this accomplishment may be met with a ho-hum indifference south of the 49th parallel, but let me explain what it means up here.

The first Olympic torch was lit in Canada more thanr 33 years ago at the 1976 summer games in Montreal. Thanks for coming. I think we got a participation ribbon, a pat on the head and a tax debt that lasted til this morning. Fast forward to Calgary for the 1988 winter games. A little better but win gold? Ahm, No, no and N.O.

So on Sunday, February 14th, 2010, at a little past 7:30 pm MST, Alexandre Bilodeau skied into the homes of every Canadian. Here I was, over 470 miles and an entire province away from the scene of triumph, yet after hearing strange noises, I rushed outside to witness a fireworks display that would rival anything you'd see on the fourth of July. 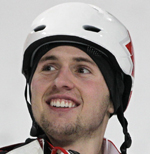 At the same historic moment in downtown Vancouver's Robson Square, thousands upon thousands of revellers began singing an impromptu rendition of O Canada. Their pitch was awful, the tone was deaf but nobody cared. Man, that was sweet, sweet music. Alexandre Bilodeau; Not only can he ski like a mogul mad-man, he's super-cute too! Alex, will you be my Valentine?

"He is my brother. He is my best friend. He is my inspiration, my strength, my confidante."

~Alexandre Bilodeau, choking back tears, describes his brother Frederic, who is challenged by Cerebral Palsy and is his biggest fan & taskmaster.

Speaking of mushy stuff, a little back story. When I was a wee lad, my dad used to take me to a barber with a peculiar hobby. This guy would take very large apples, carve faces into them, coat them with shellac and put them in the sunlight. These "faces" would then wither and become quite the spectacle.

Which brings me to Bob Costas. Long before I even knew I was gay, Bob Costas was always cute. Adorable even. Now I know NBC paid upward of 673 trillion dollars to broadcast these games but holy Larry King! Get that man some Botox or somethin! If I watch much more of this, I'm gonna hafta take back my Hi-Def TV. I want my cute Bobby. Where is my cute Bobby? What have you done with my cute Bobby?!? Yikes. ...

So, I'm a teenager at the '88 games in Calgary. One of things I remember most was their awarding of the medals. They had a system where each night the gold, silver and bronze medallions were given to the victors from the previous night's competitions. I thought the whole idea sucked. One of the highlights from Torino and Salt Lake before, was the nightly gathering at Medal Central. If one of your athletes did well, you sure as hell tuned in. People in attendance flocked to these gatherings. Hence, more spontaneous anthem eruptions. It was epic!

Well, the deep thinkers in Vancouver have taken the Calgary idea and drove it to church. Not only are the medal presentations a day late, but they're held indoors at BC Place Stadium. What a waste of euphoria! I look at this like me making love to Alexandre Bilodeau and just before my own euphoria, the alarm clock goes off instead of Jimmy Jr. Sigh. ...

Sorry 'bout that. A guy can dream, can't he? Just so ya don't think I'm some callous punk kid, a loyal follower of my other favorite website (Minnesota Mikey - The Hockey Kid) showed me the following quote from an athlete of the ancient Olympiad:

"We who compete know what sweat collects upon our brows, that we risk not only honour but our very lives in the pursuit o victory...If it be our fate to die upon the field o glory so be it, for we died in a noble cause."

At least Nodar died doing what he loved. I don't think I'm speaking out of school here, either. I mean, if you don't love luging, who the hell's gonna get you on that hill? These guys (and gals) have a very strange definition of fun. There's a lot of mothers up here that won't let their kids play hockey 'cause it's too dangerous. OK, what's the mindset in the luger's house. "Hey, let's get Timmy a luge for his birthday!" And what about that Skeleton thingy? That's just a luger who can't afford a luge so he steals a tray from the school cafeteria. The human race never ceases to amaze me. ...

Fun fact about lugers though. They might be crazy but they have a healthy respect for how things work in the wild. A while back, a Canadian athlete was out training on the same Whistler course. Down below, a bear had sidled up to the edge of the run while the starter is yelling Go! Go! Go! So the kid, all dressed in his skin-tight Canadian luge costume says: "Dude! I'm all dressed in red. That bear's gonna think I'm a giant salmon! I ain't goin anywhere!" Which proves beyond a shadow of a doubt: Luger's may be crazy but they're not stupid. ...

As we all know, drug use among athletes - and the efforts to stop them - is always a game of cat and mouse. SadIy, I don't think we'll ever see the day of a truly clean Olympic games. You may be relieved to know however, that the head of the World Wide Anti-Doping Agency is an executive member of the Canadian Olympic Committee. He recently called athletes who use performance-enhancing drugs "sociopathic cheats." I have nothing further to add on this subject other than the gentleman I refer to is named Dick Pound. Insert own joke here. ...

When I turned in my first assignment to Jim here at Outsports, knowing my maturity level, or lack thereof (please see above item), he kidded me that I hadn't mentioned our beloved Canadian beaver. Well, not to disappoint any longer, I think I've come up with a plan.

To all my fellow college cronies - and anyone else that wants to play - with each subsequent story posted, every time I mention or use the word beaver, take a drink. Now, I'm gonna have to insist you play responsibly, so as not to give our beaver a bad name. This could be fun though. Who knows, you just might learn something about beavers you didn't know. Which on this site will be a very easy thing to do. Later!