Share All sharing options for: I'm Canadian, so I'm obsessed with hockey 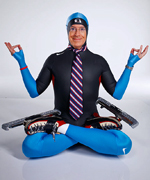 Jimmy D, 23, lives in the Frozen North and is filling us in on the Canadian Olympic obsession. In this installment, thoughts on hockey, the weather, a hot figure skater, Stephen Colbert, mocking Canada and beavers.

Friends can't believe these posts I'm writing and not for the reasons you're thinking. Yes, they knew I could write, they've seen me do it. Mostly letters of apology, sworn confessions, sometimes even in the snow, if proper facilities aren't available.

No, what I'm talking about is the fact that up til now, I have not once mentioned the game of hockey. This surprises even me. The only possible reason I can come up with, knowing myself as I sorta do, is that once the puck is finally dropped in earnest, the rest of the Games will cease to exist. I'm gonna try and fight it and as a Canadian, I think I'm supposed to watch curling, but I don't really hold out much hope.
Sure, watching the Canadian men beat up on Norway was must-do, even enjoyable in a sadistic sort of way. I was impressed by the Swiss in their loss to the U.S., too. They may be neutral but they're scrappy. The Americans, after an understandable case of bambi-legs in the beginning, look like they'll be just fine. They're young and spunky. And who doesn't like'em young and spunky? I even tuned in to see The Great 8 eat Latvia.

Out of blind obligation to the sport, I've also attempted to take an interest on the women's side of the ice. It's just not a fair fight if you're from outside North American - though Mexico does seem a little weak this year. Canada won its first game by more than two touchdowns and a field goal. The U.S. feasted on Chinese take-out. No, I can forgo this, ahem, competition until the Canadians and Americans play for gold. Bronze should be determined by whoever promises to practice the most before Sochi in 2014 .

Yeah, the tourney may have started but it doesn't really begin until the 21st. That's when Canada collides with your young Americans. Then I'll be more than happy to write something about hockey. ...

Mother Nature is being a total BEE-AWCH! Up til today, it's been nothing but rain, rain and more rain. This is going to completely wash away the stereotype of our tundra-like living conditions. The low-lying cloud cover. The mist, the fog. Only umbrella manufacturers are liking this and they do pretty well in Vancouver already.

There's a theory afloat that the nasty old broad is in cahoots with a certain someone else. The name which keeps popping up is our roguish neighbor to the north, Sarah Palin. Seems she's responsible for this dampening debacle by hiring whoever seeded the clouds in Beijing. She does this sometimes to make us stop looking in her windows. Visiting Russians are especially miffed but we make pretty damn good Iced Vodka, so they're coming around. The upside to all this dark n dreary drizzle? We can't see Levi without his Levi's. Every cloud DOES have a silver lining.

I think it's terribly sad to see Joe Biden wandering the streets of Whistler looking for Mormons and the Great Salt Lake. Just sayin. ...

I know I'll get a lot of flack for this, but figure skating? Really? I mean, sure their abilities are without question. I know I couldn't do what they do but I'm OK with that. I don't know any of the requirements, what is compulsory, why they dress the way they do or any of the terminology. 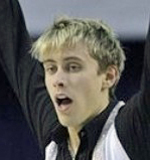 Nope, can't really get into figure skaaaa hey, wait a sec ... this might not be so bad after all! Michal Brezina nice to meet you too! Oh my goodness, yes! I'm a figure skating fanatic! Can't get enough of you, er I mean it!

Of course I'll meet you at the Kiss & Cry. Yes, I greatly admire your discipline. Stroking a spread eagle? Do you want that in the long or short program? I'll be glad to do both. Camel spin? One hump or two? Besti squat, layback spin then a sit spin? Yes! Yes! and Oh God Yeeesss! And you promise a clean program? Mr. Brezina, figure skating is totally awesome dude! Anybody got a cigarette? ...

Only a couple short months before the Games began, the U.S. Speed Skating Team found out their funding was being pulled by their chief sponsor. I think it was the Douche Bank, or something like that. Anyway, how was that beautiful coco-covered Shani Davis suppose to win more hearts than mine without financial aid?

Enter Comedy Central's Stephen Colbert and the Colbert Nation. Yup, Stephen reached out to his peeps and I think it took less than like 12 minutes to recoup the $300,000 shortfall. Our Bobsleigh team tried the same thing here with the CBC's George Stroumboulopoulas on "The Hour." They were able to raise two Toonies, a Looney and a Tim Horton's gift card that had 11 cents left on it. Ka-Ching!

So thankfully, the U.S. speed skaters are in good stead. Mr. Colbert has invaded Vancouver and is going to begin broadcasting his show on Wednesday the 17th. I know people either love him or hate him but I think Stephen's hilarious. He takes great pride in Canadian-bashing and he's very good at it. In fact, he just finished calling us "Syrup-Sucking Ice-Holes." Oh and just in case someone out there doesn't get it, his character on the show is just that, a character. He's actually very pro gay rights. If he didn't have that one deformed ear lobe, I'd could probably go for him ... he is kinda cute for an older guy. ...

Staying on the subject of speed skating for a moment longer, the oval in Richmond, BC is supposed to be the "jewel" of all the Olympic venues. So far, there has been nothing but problems and I saw where de-cuted Bobby Costas said the conditions were unacceptable. I think he's just mad at me for some previous less than flattering comments. So I'd like to apologize to Vanoc and all the residents of Richmond. You have a nice airport.

Yea, outside criticism hurts. We don't care for it. A Canadian will gladly rip into another Canadian or anything Canadiana and that's just met with a shrug 'n a beer. Like, I just took a shot at Richmond. You guys probably didn't even notice. I'm positive they didn't. They're so far below sea level that putting one over on them ain't that hard.

If it comes from elsewhere though, we hurt. We feel it. We think we've let you down. Reports from the "foreign" press are making their way back home. I mean, it's pretty harmless stuff like "Worst Games Ever" and other little digs, but it still smarts! I was deeply hurt and a little surprised when the Brits started throwing stones. Surprised, 'cause it's their turn next and we're like fellow servants of the Queen. Hurt, because each one of their stones weighs somethin like 14 pounds. Bloody bastards!

Note to Australia and your "shonky" remarks: Shouldn't you be at the Summer Games?

So, there's my third installment. Before I go though, I'd like to give a big shout out to some very special peeps from Nova Scotia. I honestly believe everyone should befriend a Bluenoser, as they are genuinely salt-of-the-ocean sort of folk.

So props to the Nova Scotia Association of Architecture. Since 1974, these fine fellows have been celebrating 'Beaver Day' on the final Friday in February. On a sad note, association president Castor Canadensis has succumb to a bad case of giardiasis and will not be attending this years celebration. Get well Castor. My first-aid kit is on it's way.

Please feel free to send me any suggestions. I will gladly forward them through the proper channels. Perhaps it is time. An 86-year-old beaver ... See ya!