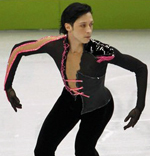 Johnny Weir continues to be attacked by the big, macho sports media, and this time the attack is coming from Canadians. Claude Mailhot on channel RDS said he thought Weir may have lost points due to his costume and body language; It was a perfectly acceptable observation, and one many have made. Then Alain Goldberg replied not so acceptably:

Goldberg replied that Weir's feminine style may reflect badly on other male figure skaters. "They'll think all the boys who skate will end up like him," he said. "It sets a bad example."

In earlier RDS coverage of Weir, Goldberg and Mailhot also brought up South African runner Caster Semenya, who was forced to undergo gender testing following her 2009 win at the world track and field championships in Germany.

"We should make him (Weir) pass a gender test at this point," Goldberg said and Mailhot then jokingly suggested Weir should compete in the women's competition.

I'm really proud of how gracefully Weir has taken all of these nasty jibes. He is the better man.

GLAAD is taking action against some sportscasters.