Out lesbian has her team in the NCAA's

Share All sharing options for: Out lesbian has her team in the NCAA's 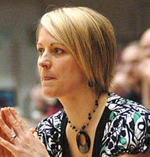 There is a nice feature in the Seattle Times about Portland State women's basketball coach Sherri Murrell, who has taken her team to its first appearance in the NCAA tournament. They are seeded 15th and are a tourney longshot (update: Portland State lost, 84-53 to Texas A&M).

She had been the coach at Washington State before resigning. When she took the Portland State job, she also decided to be more open about who she is.

Murrell altered her coaching style and decided she'd be open about her sexuality, proudly placing a picture of herself, partner and twins in the media guide. She remains the only out Division I head women's basketball coach, saying the honesty is easier on her partner, boosters and players.

"It's not like I had a team meeting and said, 'Hey, I'm a lesbian,' " Murrell said. "But if the kids ask, 'Coach, do you have a family?' I tell them. I made a conscious decision this was how it was going to be.

"A lot won't do it because of a fear of the unknown — people not wanting to send their kids to play for you. I did not know how it was going to play out, but it didn't keep me from being authentic and being myself. And it became a non-issue."

Being honest and authentic has worked for Murrell. The sky did not fall and her sexual orientation became a non-issue, just like it's supposed to be.

Hat tip to a couple of readers who sent the story along.