Share All sharing options for: Dan Lebatard: TMZ Sports will out athletes 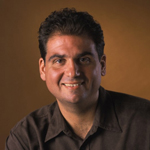 The Miami Herald's Dan Lebatard is cringing at the thought of TMZ's sports wing, scheduled to open up shop this year, in part because he thinks a closeted gay athlete will be their No. 1 target.

One of the first orders of business at TMZ Sports, rest assured, will be to out a gay male athlete. It is the only boundary left to cross. It will either wreck that athlete's life or make him the next Jackie Robinson or maybe both.

That's a pretty horrible thing to do to someone against their will, obviously.

But an outraged America will punish the behavior by showering it with views, dollars and rewards.

He might be right (about TMZ outing an athlete), but the head of TMZ is a gay man and I'm not sure he's keen on outing people.

The column also makes me wonder what Lebatard knows. It's clear he wouldn't out an athlete. Is he hiding a secret? Or is the better question, how many athletes' secrets is he hiding?