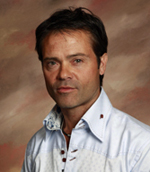 Darren Chiacchia, 45, an Olympic bronze medalist in equestrian, faces 30 years in a Florida prison after being charged with not revealing his HIV status to a former boyfriend after they had multiple sexual encounters.

The case, which goes to trial in June, stems from laws selectively used in 32 states that make it a felony for someone who is HIV-positive to have sex without informing their partner of their status. In Chiacchia's case, he met a man on a gay dating site in February 2009 and they dated until June. The unidentified man, who says he was HIV-negative at the time, broke off the relationship after discovering Chiacchia's status and informing the Ocala, Fla., sheriff, who filed charges. The man's current HIV status is unknown.

Florida is one of at least 32 states nationwide that have criminal statutes specific to H.I.V., many of which date to the height of the AIDS epidemic in the 1980s and 1990s, when fear of spreading the disease was at its peak. As the science and treatment of H.I.V. and AIDS have changed considerably in the ensuing decades, fear of infection has subsided. However, the laws remain on the books, and prosecutors continue to enforce them. ...

A recent survey by the Center for H.I.V. Law and Policy documented at least 50 cases nationwide since January 2008. But laws can be unevenly applied, even within a state. Although records show that at least 71 people have been arrested under Florida’s H.I.V. law since it was enacted, Mr. Chiacchia is believed to be the first in his five-county region to be prosecuted under the law, said the assistant state attorney handling the case.

In 2004, Mr. Chiacchia helped the United States equestrian team win an Olympic bronze medal in the eventing competition in Athens. He was preparing for the Beijing Olympics in March 2008 when his horse tumbled over a jump during a competition. He broke several bones, punctured a lung and sustained a severe brain injury that affects his memory.

While being treated for his injuries at a hospital in Gainesville, Mr. Chiacchia tested positive for H.I.V, according to a sheriff’s report.

I was stunned in reading the New York Times piece that these types of laws are still enforced, including ones that make saliva a deadly weapon when spit by a person with HIV; this despite all medical evidence that you can't spread HIV this way.

Like all gay men engaging in sex with someone new, Chiacchia's ex-boyfriend should have assumed his partner was HIV-positive and taken appropriate precautions; by bringing charges, it seems like nothing more than vindictiveness for a relationship that did not work out.