Canucks can have as much sex as they want

Share All sharing options for: Canucks can have as much sex as they want 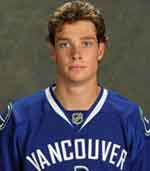 Mason Raymond of the Canucks

Vancouver Canucks coach Alain Vigneault, whose team plays the Los Angeles Kings in the NHL playoffs, has no problem with his players having as much pre-game sex as they wish. While the coach said the team can control the diet, workout and even sleep regimen of the players, sex was something out of his control.

"As far as the sex goes, that's none of my business, they can do what they want. I like to have a lot of control but (not) that part there," Vigneault said.

The print edition of the Sun had the players answering whether they abstain from sex on game days (anyone who has a copy should share the responses).