Share All sharing options for: Stanley Cup, Blackhawks to march in gay Pride 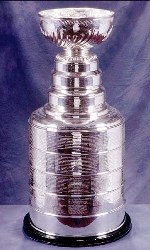 “We’re thrilled and honored,” said [Chicago Gay Hockey Association] president Andrew Sobotka. “To know that our idea of having The Cup and a member of the Stanley Cup champions join us in the Pride Parade is amazing. We hope the whole City of Chicago shows up at the Pride Parade to, once again, salute the champs and show our city-wide pride in the Blackhawks."

The Blackhawks earlier this month caught some heat for celebrating their championship with a "Pronger is gay" message written on a white board. This ought to make everyone forget about that.