The West Hollywood water polo team has someone watching over their shoulders at this year's Gay Games. The players are all wearing tattoos on the shoulders that honor Tom Martinez, their longtime coach who died of a heart attack while swimming in 2008.

"Tom was very instrumental in helping build the team," said Ash Martin. This tournament is the first for WeHo since Martinez died and they thought the tattoos were an appropriate way to honor his memory. Martin credited Martinez with being able to successfully build a team composed of young players, some of whom were top-flight players and others with more rudimentary skills. It was a formula that has resulted in numerous titles for the team, the defending Gay Games gold medalists.

"When you take a group of young, headstrong water polo players, it takes a very strong will and personality," Martin said.

Repeating as gold medalists will not be easy, with teams like QUAC from Salt Lake City and the Melbourne Storm in the mix, along with the Amsterdam squad that won the Outgames last year. Maybe Martinez's spirit will be the extra edge WeHo needs.

Update: WeHo lost to Melbourne in the semifinals, 8-3. 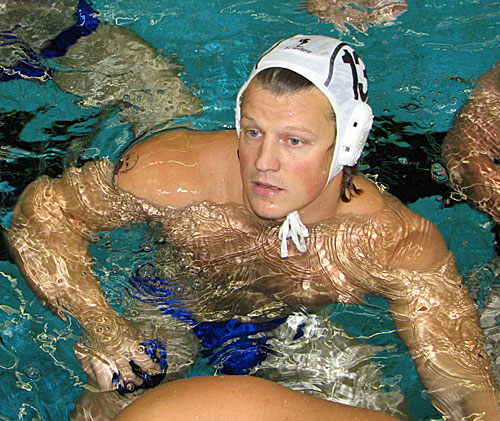