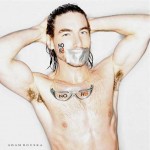 Ryan Nadeau is a 23-year-old former club swimmer at Boston University. He is straight but his father and his brother are gay and he has many gay friends. So he readily accepted the invitation from wrestler and gay rights activist Hudson Taylor to participate in a NoH8 photo shoot late last year in New Jersey.

But Nadeau also had another reason to show his support for gay rights and it was how he treated someone on his high school team, a time he was not proud of. As Nadeau wrote me:

I do not know many gay athletes, but in high school there was on guy on the team, Kyle, who was very feminine and has since come out of the closet.

Myself and my two best friends on the team were not very kind to him. Even though I knew it was wrong to make fun of him, I was stupid and young. I didn't think about how we were making him feel. I regret teasing him and making him feel the way he did. This was a conservative school in Texas. I should have been a better role model and not such a douche. [The photo shoot], to me, was a good step in the right direction.

Nadeau was three years older than Kyle and lost touch with him. Until today, when he got in touch via a friend who saw my first version of this article. Here is Kyle's response:

I accept your apology. I'm glad you can look back and realize that teasing and harassment are not only wrong, but inhibit people for the rest of their lives or even cause them to take their own. ...

Undeniably high school was very uncomfortable for me, and it's obvious I never fit in. It wasn't my goal to either ... I've done extremely well. Thankfully I did not become a victim, and I am very proud of who I am.

It's terrific that Nadeau is trying to make amends for how he acted in high school (something a lot of us do), but he doesn't just talk the talk about making a difference. Thanks to Taylor's fiancee, Lia Mandaglio, I saw an article about how Nadeau raised $2,700 in much-needed aid for flood victims in Pakistan last year, where he was an intern. A swim instructor in Boston, he is also working on some development projects for Pakistan.

Here is Adam Bouska's image of Nadeau from the NoH8 campaign: 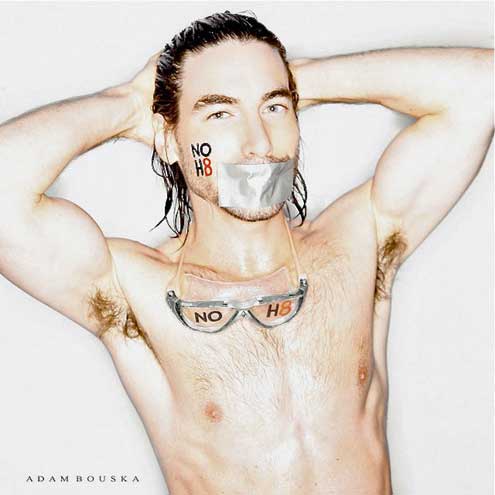