Share All sharing options for: Gay, straight teenagers more alike than not 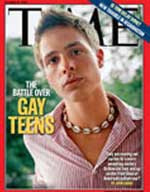 While this is not exactly sports-specific, a recap of new research contradicts some long-held beliefs about being a gay teenager. Basically, according to this excellent article by Jane Brody in the New York Times, gay teens aren't much different than their straight counterparts.

The good news is that recent research finds more similarities than differences among gay and straight adolescents. For example, studies in Salt Lake City by Lisa Diamond, an associate professor of psychology and gender studies at the University of Utah, found that young gays had as many friends and were just as popular and socially connected as other teenagers.

The composition of their friendships is somewhat different, she noted. Gay teenagers tend to go out of their way to befriend youths of other races or those who are stigmatized for their looks.

But for gay and straight teenagers alike, Dr. Diamond said in an interview, the chief source of stress is the same: “anxiety about being alone as an adult, about finding the kind of partner they want.”

This rings true to me since I have become friends with Brad and Robert, two high school athletes who are gay and starting a blog (you can read Brad's coming out letter to his parents). They both expressed frustrations about how hard it is for them to date since there are few, if any, openly gay classmates and the people they connect with online live hundreds of miles away. At the same time, they come across as well adjusted as any teenager, with Brad showing me his dance moves on webcam and Robert texting me about the NFL as we both watched the Colts-Titans game on Sunday from our homes.

The article also pointed out that bullying does not exclusively happen to gay kids, but on anyone perceived as different. "Bullies react to nonconformity, and they pick up on people’s weaknesses."

It also noted that increased attention on bullying and discrimination can send the message to gay teens that their life is destined to be miserable.

The "It Gets Better" video project is a terrific antidote to such ideas. However, in watching many videos the message that often comes through is that teenage life sucks and it only gets better once you become an adult. Many are just so damn depressing since the beginning of the video is often filled with a catalog of discrimination faced as a teen. It is heartening at least that research is showing this is not the case for all LGBT teenagers.