Share All sharing options for: Gay Canadian teen was bullied because he preferred figure skating to hockey 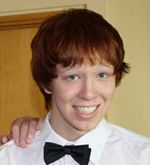 There are really no words to convey the sadness over another suicide by a gay teenager, this time Jamie Hubley, 15, from Ottawa. He killed himself Saturday, overcome by depression from being bullied and harassed as the only openly gay student at his school. He was picked on because he preferred figure skating to ice hockey.

Jamie wrote this on a blog after someone encouraged him to hang in there and not hurt himself, saying it would get better:

Hubley said the bullying began when Jamie was in Grade 7 and teens tried to stuff batteries down his throat on the school bus because he was a figure skater.

"[Jamie] was the kind of boy that loved everybody," said Hubley, "He couldn't understand why everyone would be so cruel to him about something as simple as skating."

"He just wanted someone to love him. That's all. And what's wrong with that? Why do people have to be cruel to our children when all they want to do is be loved?" said Hubley, speaking on the phone with the CBC's Ashley Burke.

You must read Toronto Star columnist Heather Mallick's eulogy for Jamie. It made my cry and also got me very angry that this stuff still happens to this day:

You can’t tell a 15-year-old to wait three years. To him, it sounds like 30, which to a teenager is practically dead anyway. And when I look at middle-aged people, including many in public life, who can’t admit publicly that they’re gay, it’s clear that time heals nothing. We all fear bullying. ...

High school is the distillation of our lives, with a term limit, filled with cliques and home to the best and worst of our traits. Remember those hallways lined with lockers, which I recall happily but now realize must have seemed to the bullied kids like a gauntlet they had to run over and over, five days a week. What I wonder is if Jamie’s tormentors understand even now what they did and why.

As Jamie wrote in his last post on his Tumblr blog, “To the people who didn’t like me (many) a big f --k you. Go ride a unicorn.”

And then he adds, “But we love you anyway.”

Even as he headed for death, he had to add, in a clause from a naturally kind heart, some forgiveness for his tormentors.

I cannot get over this.