Share All sharing options for: Jake Plummer tells Broncos QB Tim Tebow to shut up and keep his religion private 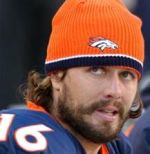 Cyd's "Why I hate Tim Tebow" post continues to draw a lot of comments. Ex-Denver Broncos quarterback Jake Plummer likes and admires Tebow but wishes he would quit shoving his religious beliefs in our faces. And he said it quite well during a radio interview on XTRA Sports 910 in Phoenix:

Tebow, regardless of whether I wish he’d just shut up after a game and go hug his teammates, I think he’s a winner and I respect that about him. I think that when he accepts the fact that we know that he loves Jesus Christ then I think I’ll like him a little better.

I don’t hate him because of that, I just would rather not have to hear that every single time he takes a good snap or makes a good handoff…like you know, I understand dude where you’re coming from….but he is a baller. He knows how to win and when your teammates believe in you that you can do good things and that’s what they are doing. They are winning. That’s fun to see.”

I always liked Plummer since he was not your typical cookie-cutter jock. I especially like how he slammed the U.S. military for how it handled the death of his former Arizona Cardinals teammate Pat Tillman. I liked him again when I read this Sports Illustrated profile of his post-NFL life that includes professional handball. And I like him even more for his comments on Tebow.