Share All sharing options for: St. John's basketball fans called out for anti-gay chants at game 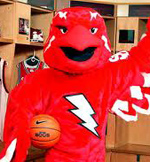 New York Post columnist Lenn Robbins has a great column slamming St. John's Univesity college basketball fans for their use of gay slurs during last weekend's game against the University of Arizona.

I didn’t find anything clever about the St. John’s fans in the student section that were chanting “U of Gay” as a mocking retort to Arizona fans’ chant of “U of A” at the Garden yesterday for the 2K Sports Classic.

I’m looking at these young, energetic, supposed future leaders crammed into the “Redzone” section behind the basket and I think, “What if one of their friends who is gay is sitting in that section, listening to this homophobic venting?”

Maybe that young man or woman is wondering: “Is the university I attend, which is located in the most socially diverse city in the world, the right place for me?”

Later, some morons in the St. John's fan section were chanting "Suck my Johnnies!" The university said they would address the issue of fan behavior.

I applaud Robbins for pointing out the offensive (and uncreative) nature of these chants. I wish more media people would write about the stuff that is chanted at sporting events, since it is telling of group behavior. But in the comments section, he is the one being criticized for being overly sensitive. Go figure.