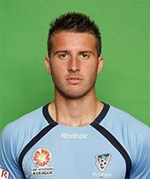 Antony Golec, a defender for the Adelaide United soccer team in Australia, has apologized and been reprimanded after he sent a tweet that used a gay slur to insult a referee.

Golec was watching a match on TV involving two other teams Saturday when he took to Twitter to insult referee Ben Williams for some calls he had made. Golec first tweeted that Williams was the worst referee ever, then followed it up with this:

"Ben Williams you are gay, biggest homo going around, you gypsie."

Golec, 21, obviously unaware how Twitter works, said he meant his comments to go only to his brother, but they were widely retweeted. Adelaide United said Golec's contract would be terminated if he committed another transgression. Golec issued this statement:

"I accept without reservation what I did was foolish and that as a consequence Ben Williams has every right to feel insulted and aggrieved. I unreservedly apologize to Ben. What I thought were private comments were sent in a moment of excitement, without proper thought being given to them."

Golec has now canceled his Twitter and Facebook accounts. No word on whether he will also apologize for the slur against Gypsies.