The day Joe Paterno cursed me out, or why I am glad he is gone

Share All sharing options for: The day Joe Paterno cursed me out, or why I am glad he is gone 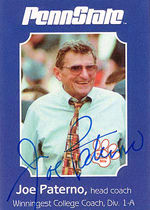 I am a graduate of Penn State University and yet have never been a fan of football coach Joe Paterno. So I am not saddened that he is out, effective immediately. His actions – and rather inaction – in the child molestation case against former assistant Jerry Sandusky made it impossible for him to continue. I won't shed any tears.

My beef with Paterno is personal and occurred in 1981 when I was a young reporter at the Centre Daily Times in State College, Pa., my first job after graduating. It was then I saw a side of Paterno that did not jibe with his St. Joe, holier-than-thou image.

One of my beats was the courts and one day at the county courthouse I got a tip of an interesting lawsuit – Joe Paterno was suing Our Lady of Victory Church. The case was simple – Paterno's son David, then 11, fractured his skull after he fell off a trampoline at the church and Paterno alleged negligence (David recovered fully and a settlement was reached).

I was told by my editors that I had to get a comment from Paterno, which made me nervous since I had never talked to the legend. I dialed his number and got him at home. I introduced myself and explained that I needed a comment on the lawsuit. I got a comment all right, but not what I expected.

Paterno launched into a stream of expletives, pretty nasty stuff, telling me how dare I ask him about a personal matter and he would talk about football but not his family. I tried to explain that he filed a public lawsuit in court and it was my job to get a comment. The berating started again and I so wished I had recorded it since I was stunned by his vehemence and use of language, so at odds with his public image (such a recording would have gone viral in today's Internet era).

I got off the phone shaken and told my editors. When I asked what I should write, the response was, “Mr. Paterno has no comment.” When I shared my story around the newsroom, I was told it was not that much of a surprise. Paterno could be a dick, as I saw firsthand. One reporter told me that a group of middle school kids getting awards on campus were kicked out of their space early when Paterno decided he needed it for football purposes that day; that story was never written, since Paterno was the most powerful man on campus and lauded nationally and our paper was not about to rock the boat.

I often see how powerful people treat those beneath them in stature as a sign of character. From my experience, trivial as it was in many ways, I always knew that the Paterno myth was just that. Not that he was a bad person or did not do good things but that he was little better than other people who achieved his status and start believing their actions have no consequences.