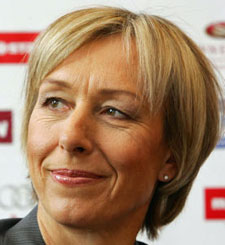 Last week, tennis great Margaret Court lashed out against gay people and gay marriage; Her homophobia has become a lasting theme in her retirement. Out lesbians Martina Navratilova and Billie Jean King both returned fire this weekend. Navratilova told the Tennis Channel:

Seems to me a lot of people have evolved as has the Bible, unfortunately Margaret Court has not. Her myopic view is truly frightening as well as damaging to the thousands of children already living in same gender families. ...

I have tried to talk to Margaret, but to say she’s completely close-minded on the issue is an understatement.

I respectfully disagree with Margaret’s position on gay marriage. We have to commit to eliminating homophobia because everyone is entitled to the same rights, opportunities and protection.