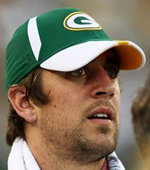 With all the insanity of Super Bowl media day, it seems at least one reporter had gay on the brain. While I can't figure out who it was, a media day attendee from Dallas' 105.3FM The Fan asked some sexually charged questions. From Time:

But in a new media day low, a reporter from Dallas-area sports radio station, 105.3 The FAN, asked one Packer if he would turn gay if that would guarantee a Super Bowl victory for the team.

To confirm I heard this line of questioning correctly, I watched this reporter interview a Steelers player during Pittsburgh's media session. First inquiry: "Who has the biggest wiener on the team?" She asked the player who his favorite celebrity was. When he told her it was Denzel Washington, she asked if he would "hook up" with Denzel in exchange for a Super Bowl ring.

It continued. She asked if he would "French kiss" his father for a million dollars, and implored him to "describe a vagina."