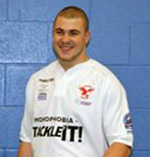 Sir Elton John joined prominent out athletes in supporting the Sheffield Eagles in England for their wearing of jerseys condemning homophobia in rugby. The Eagles wore the jerseys, which said "Homophobia: Tackle It," Sunday in a 44-16 loss to the Widnes Vikings.

"I am delighted to hear about Sheffield Eagles' initiative" said Sir Elton. "I feel that an enormous step forward is being undertaken when Rugby League recognizes the diversity of human sexuality. I applaud all those involved in this initiative. Best wishes and love."