Share All sharing options for: Openly gay soccer player Anton Hysen says any boyfriend of his has to like sports 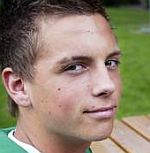 Swedish soccer pro Anton Hysen, who came out as gay a week ago, says he is picky when it comes to having a boyfriend. For one, the guy has to like sports.

He told Charlie Wyett in a terrific Q&A in the London Sun:

I have never had a boyfriend. I am having trouble with that. I know I am gay but I am picky. I am not into all this stereotypical gay-pride thing. The person I like will have to like sports.

The more I hear from Hysen, 20, the more I like him. He is gay and is not making any apologies for it. In fact, he even jokes with his teammates about it.

When we are in the showers, I obviously say stuff like 'Don't drop the soap'. I really don't care. When I walk into the dressing room I say 'Watch out, he's here' - but I know they respect me. And I respect them.

Hysen realized he was gay as he was dating a supermodel and it just didn't click.

When you consider dumping a supermodel, you know you are gay. She was beautiful, one of the most beautiful women I have ever seen but obviously, I had an issue.

Hysen has a lot more to say on gays in sports and soccer and the reaction to his coming out (he's had to shut down his Facebook page after all prospective boyfriends e-mailed him). The interview is well worth checking out.