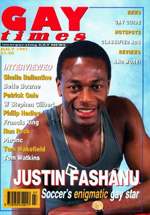 Justin Fashanu was the first and still only English pro soccer player to come out. He had a very troubled career and life and committed suicide in 1998. Writer Keph Senett wrote about a ceremony that honored Fashanu on what would have been his 50th birthday. This article is excerpted from the original piece published on her blog.

If he’d lived, [Feb. 19] would have been footballer Justin Fashanu’s 50th birthday. The Norwich City FC, Fashanu’s club between ’79 and ’81, posthumously inducted him into their Hall of Fame at Carrow Road. Norwich City’s Chief Executive David McNally unfurled Fashanu’s banner with the help of The Justin Campaign’s founding Director, Jason Hall.

As reported by the Norwich Evening News, McNally backed Fashanu’s induction and the work of The Justin Campaign. “Discrimination of any kind shouldn’t be accepted in any form of society and especially at the football club,” McNally said. “We deplore racism of any kind and will do all we can to help the Justin Campaign and the people from Norwich Pride achieve their aims and if it means together we can kick homophobia from this great game of ours and this great club then all well and good.”

“Norwich City nurtured a fantastic footballer – the world’s black first £1m player – a tremendous talent,” said Jason Hall. “It’s been a long time coming for Justin to be put in the hall of fame but he fully deserves it.” 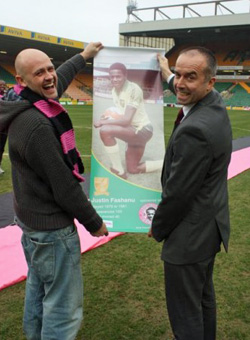 The delay in the recognition of Fashanu’s contribution to his club and to the world of football can be at least partially attributed to a culture that has a history of racism and homophobia. Justin Fashanu’s extraordinary skill (most famously on display during a match against Liverpool in 1980) demanded that the football world sit up and take notice. If he’d been a different sort of player only in that he was black, he might have been honored sooner. He might have survived.

But Justin Fashanu was also gay, and in 1990 he publicly came out. The move essentially ended his career. Though he was still in peak condition, no club offered him a full-time contract. Some of his colleagues spoke out against him, and his brother publicly disowned him. The press used the story to run sensational headlines, and he was the target of abuse hurled from the crowds in stadiums. Eight years later, in the shadow of a sexual assault allegation, Justin Fashanu hung himself in a garage in Shoreditch, London.

[Feb. 19] marks the second annual Football v Homophobia Initiative, an international day opposing homophobia in football. On this day, what would have been his 50th birthday, Fashanu is still the only professional footballer to disclose that he is gay.

Still, for an event that is only two years old, it’s been wildly effective. “This year it’s going to get bigger, better, louder and prouder than before,” Campaign Director Darren Ollerton pledged earlier this year.

The Campaign made good on this promise with over 30 events scheduled worldwide in places including Canada, the Netherlands, Spain, the Ukraine, and the USA, as well as the United Kingdom.

And while the spirit of the Initiative has always come from the grassroots, perhaps the most impressive gains from this year come from the big organizations. Both the FA and UEFA officially announced their support of The Justin Campaign, proving once again that with a little determination and the support of a great team, a worthy player will find their breakaway.

To learn more about The Justin Campaign, check out the website.

To find out about Football v Homophobia Initiative events happening near you, visit the site.

Keph Senett is a Canadian writer, currently living in Mexico, whose passions for travel and soccer have led her to play the beautiful game on four continents. She's the Communications Officer for The Justin Campaign, and you can read more from her at kephsenett.com.