Novak Djokovic in swimsuit for Vogue

Share All sharing options for: Novak Djokovic in swimsuit for Vogue 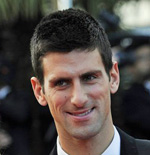 Tennis player Novak Djokovic is having an amazing year, starting 2011 with a 37-0 record, winning all seven events he's entered. His sights are set on the upcoming French Open, dominated in recent years by Rafael Nadal.

Vogue has taken notice with a story and photos (including one in a swimsuit) documenting his rise. One key he attributes some of his success to is a change in diet:

He was tested for food intolerances, so the Novak Diet is basically gluten-free with plenty of protein plus vitamins on the side. And even though he lives in Monte Carlo, a land flowing with good red wine (Djokovic: “I love wine—I used to drink a glass a day”), he’s given it up. He lost some weight on this diet, he says. “I am very skinny.”

You have a tiny waist, I say. He giggles: “A very tiny waist.” He is very skinny: weighing, halfway through the Sony Ericsson Open, 176 pounds at six feet two. That’s around ten pounds lighter than the other three. (Andy Murray is 185 pounds and six feet three, Rafa 188 and six feet one, and Federer 187 and also six feet one.) It shows in his play—lightfooted, quicksilver, deadly: “I am fast and very powerful on the court, so this is what matters.”

"Very skinny?" That's not the word that comes to mind from this Vogue shot of Djokovic in a swimsuit.