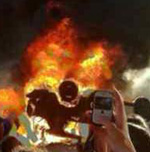 Canadian fans can act as idiotic as fans anywhere and Canucks fan are especially bad losers. From the New York Times:

Similar rioting occurred in 1994, the last time the Canucks were in the Cup finals (they lost in seven games to the Rangers). I realize the fans were upset after the massive choke job by the Canucks, who collectively played the last two games like LeBron in the fourth quarter (wags are calling Canucks goalie Roberto Luongo "LeBron-go"), but rioting is obviously taking it a bit too far.

As for the series, the Canucks led two games to none and 3-2, yet rolled over the final two games, losing by a combed 9-2. Overall, the Bruins outscore the Canucks, 22-8. The Canucks had been the league's highest scoring team, but could get almost nothing past Bruins' goalie Tim Thomas.

This was Boston's first Stanley Cup win since 1972. Strangely, the Boston-based team with the longest championship drought is the Patriots, who last won it all in 2004.

In Vancouver, the Canucks' loss stung, but the rioting stung more. Said the Vancouver Sun:

We were supposed to wake today hung over from a Stanley Cup victory; instead the city opens its bloodshot eyes to the much sadder reality of a tarnished reputation.

Given the rate the Canucks make the Finals (like the cicadas, it's a 17-year span), the next hockey riot in Vancouver will be in June 2028. You can book it.