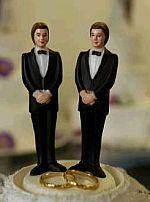 The New York state Senate just joined the state Assembly and passed a bill, 33-29, allowing for same-sex marriage in the state. Gov. Andrew Cuomo will sign the bill and marriages can start 30 days after the signing.

New York becomes the sixth and by far the largest state to endorse gay marriage. It's a great night for equality, though the odious Defense of Marriage Act is still federal law. Would love to hear everyone's comments.