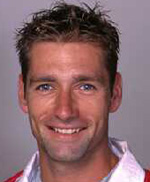 Pichler came out in 1996 and competed in the Atlanta Games that year and in Sydney in 2000, where he was the team captain. Jeffrey competed in the 1988 Seoul Games but was openly gay when he competed in 1996. At one point, Jeffrey became Pichler's coach.

Pichler's 1996 was the stuff of soap opera after he accused his Olympic coach Ron O'Brien in meddling in his relationship with his boyfriend, accusing O'Brien of being out to get him. Wrote the Fort Lauderdale Sun-Sentinel at the time:

"It's been sheer hell on a regular basis," Pichler said after last month's U.S. diving trials in Indianapolis. "I have been harassed, assaulted and pushed. When I compete, [O'Brien) walks by and plays head games with me all the time." Since the trials, Pichler has declined to comment.

Pichler, who was runner-up in the trials, says he will feel "very uncomfortable being on the same pool deck" with O'Brien, even though he once trained under O'Brien as a member of the Fort Lauderdale Diving Team.

[Steven] Guiffre, Pichler's companion, says O'Brien loathes him so much that he fears the coach would set up Pichler to fail his Olympic drug test, by tampering with his food or drink.

For his part, O'Brien blamed Guiffre for messing up Pichler's preparation, likening the diver to an abused spouse. Read the whole story since it's all rather confusing.

As for Jeffrey, he has been the head coach of Florida State's men's diving team for 12 years. He was inducted into the Ohio State Hall of Fame in 2005.