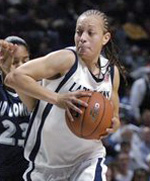 Basketball, 2005: Harris was kicked off Penn State's basketball team in 2005 by coach Rene Portland, who accused her of being a lesbian. Portland had a long history of homophobia, claiming she would not have lesbians on her team. In December of that year, with the legal counsel of the National Center for Lesbian Rights, Harris sued Portland and the school, claiming discrimination.

"I couldn't have lived with myself if I didn't speak up," Harris told USA Today in a 2006 profile. It's a horrible, humiliating situation to go through. I didn't want anyone else to have to go through this again. Anywhere."

The school was spurred to conduct an internal investigation and found that Portland had created a "hostile, intimidating and offensive environment." She was fined $10,000 and ordered to undergo diversity training.

Harris settled her lawsuit in 2007 and later that year Portland resigned. Harris went on to graduate from James Madison University. The film "Training Rules" took an in-depth look at Portland's history of homophobia while the Penn State coach.