'Out: The Glenn Burke Story' to get national release on Versus in August

Share All sharing options for: 'Out: The Glenn Burke Story' to get national release on Versus in August 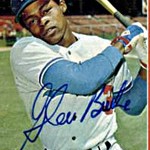 Many have bemoaned the fact that the Emmy-nominated documentary 'Out: The Glenn Burke Story' has only been aired in Northern California. Now Versus, best-known for their NHL broadcasts, is stepping up to air the film nationally on Tuesday, Aug. 9, at 10pmET. From the Versus press release:

“Out. The Glenn Burke Story” tells the dramatic tale of Burke’s Major League career as an outfielder for the Dodgers and as a starter in Game One of the 1977 World Series, to being traded to the Oakland Athletics the following season, and then walking away in 1980 from the game that he deeply loved. Many of Burke’s teammates were aware of his homosexuality during his playing career, as were members of management. Many of those teammates believe that Burke's sexuality led to the premature derailment of his baseball career.

“Out. The Glenn Burke Story” explores the wedge that was driven between Burke and the Los Angeles Dodgers management, the ensuing similar situation in Oakland that led to Burke’s abrupt retirement, and the hero’s welcome that Burke received in San Francisco’s Castro District after he left professional baseball. The documentary follows him through his public announcement of his homosexuality in a 1982 Inside Sports magazine article and on The Today Show with Bryant Gumbel, to his downward spiral after his split from baseball, a split that drove Burke to drugs and prison, and eventually to living on the same San Francisco streets where he was once recognized as an icon.